In the weeks leading up to the series, we are publishing a series of posts that spotlight the many different plays and events that will be part of TACTICS 2017. Read on to get the inside scoop on our programming!

TACTICS Season 3 is fast-approaching with just over three weeks until the official opening on Thursday, April 20! This week we are focusing on the second main stage show of the series, Greg MacArthur’s girls!girls!girls! which is set to run April 27-May 6 in Arts Court Theatre. 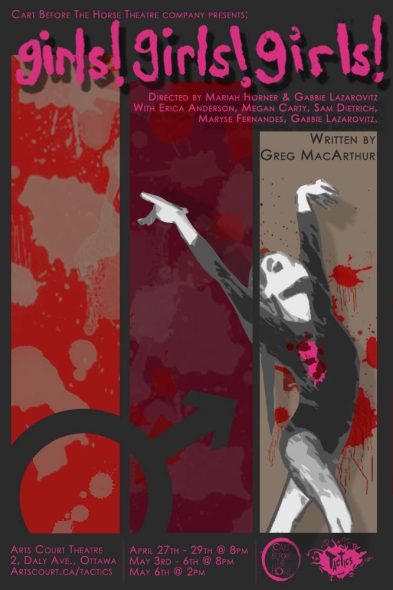 This gritty drama was written in response to the 1999 Columbine High School massacre in which two seventeen year-old boys killed twelve students and a teacher before committing suicide. At that time MacArthur was following very closely the trials of the Reena Virk murder case, in which a fourteen year-old girl was brutally beaten and subsequently drowned in Victoria, BC. MacArthur was moved “not only by the terror struck into the lives of he victims but also by the unrecognized struggles of the killers—the distorted yet human face of social rebellion and boredom, recklessness, and control.”

Fictional in its narrative, girls!girls!girls! tells the story of four young teenagers who seek revenge on the winner of a gymnastics competition and go on a hunt for her red ribbon. Produced by Cart Before the Horse Theatre, this dynamic and fast-paced show is directed by Gabbie Lazarovitz and Mariah Horner and features an acting ensemble of emerging local artists, an original musical score by Belgian composer Martin Dawagne and fight choreography by Charles Douglas.

This production is being created collectively by a team of artists who share the belief that theatre is an powerful outlet to explore topics we are otherwise afraid to talk about. Committed to exploring how the lives of young women are expressed by playwrights in contemporary Canadian Theatre, girls!girls!girls! is the third instalment of a trilogy that focuses on violence against girls (the first two being The Shape of a Girl by Joan MacLeod and last year’s acclaimed TACTICS production of Judith Thompson’s Perfect Pie). The company strives for work that is provocative, dynamic, and highly-stylized with an approach that always incorporates original sound composition and physical theatre. They hope to inspire a dialogue about bullying in the community with this piece and initiate change.

During the run of girls!girls!girls! TACTICS is also excited to add several new events to its programming, including presentations of new works by local creators, in addition to two very special events happening on Thursday, May 4. At 6pm, we will host Show Plates, a multi-course pre-show meal in Arts Court Studio. This meal will be created by a team of Ottawa’s most exciting independent chefs, led by Tarek Hassan of Gongfu Bao food cart. The limited tickets are just $65.00 and include admission to the 8pm show of girls!girls!girls! immediately following the dinner. And after the performance that same evening, the New Ottawa Critics will join us to host their first ever “Critics’ Salon”—adopting the model of a traditional book club, the Critics’ Salon brings people together post-performance to talk about their individual experiences within the audience collective.

We are so thrilled to be bringing together Ottawa’s indie scene together—theatre artists, chefs and foodies, critics and audiences—in what’s shaping up to be out most exciting series yet. See you there!